Spy Fox in 'Dry Cereal' is a "point & click" adventure game developed by Humongous Entertainment for the Windows, PlayStation, and Macintosh operating systems in 1997. It was later republished and released on the Wii by Atari and Majesco Entertainment.

The game follows agent Spy Fox to the Greek island of Acidophilus to discover the whereabouts of the missing Mr. Howard Hugh Heifer Udderly the Third and recover the world's missing supply of milk. Two sequels entitled Spy Fox 2: Some Assembly Required and Spy Fox: Operation Ozone were released in 1999 and 2001, respectively.

William the Kid is intent on stealing all the world's milk, leaving every kid in the world left with dry cereal. Meanwhile, SPY Fox is on an airplane where a waitress comes by and gives him a Greek plate with a TV on it. Monkey Penny appears to tell him more about Kid's evil plan and that Howard Hugh Heifer Udderly the Third, one of the leading dairy businessmen, has more information on the dairy crisis. SPY Fox heads to the Greek island of Acidophilus to investigate. After meeting up with Monkey Penny at the Mobile Command Center, SPY Fox sets out to the Feta Factory to rescue Mr. Udderly, who has the whole story on the crisis. He was kidnapped and learned that Kid's scheme is being run by the Nectar Of the Goats, or N.O.G., by first capturing every dairy cow in the world, building a milky weapon of destruction, using it to flood the capital, framing every cow, all in order to take over the entire dairy world by replacing all dairy milk with goat milk. Udderly states that while he was a prisoner, he managed to swipe the activation code for deactivating the diabolical device, but he was forced to swallow it to keep Kid from discovering he had it. With the appropriate spy gadget, SPY Fox is then able to read the code.

During his mission, SPY Fox must search all over the island of Acidophilus for clues to find Kid's "secret island fortress" and find the key item to deactivate the weapon of destruction. His most successful investigation centers on Kid's Head of Public Relations, a cat named Russian Blue, and close personal associate of William the Kid and "one bad kitty". She is also the owner of the luxury ship, the S.S. Deadweight, and can be found on board the ship.SPY Fox tricks his way onto the ship's deck party and gets the location to Kid's Fortress.

After finally getting inside the fortress, he disarms the traps, sneaks past the guards and meets his informant. Using the key item he acquired, SPY Fox disarms the weapon. Kid then floods the world's cows and escapes through a secret pathway. After freeing the dairy cows, Kid flies in his "giant metallic getaway blimp", promising SPY Fox he will return. Optionally SPY Fox can jump in to a truck waiting nearby and chase Kid, then catapult himself onto the blimp, sending Kid into the Evil Villain Jail that Monkey Penny and Professor Quack have set up below.

In the end, Spy Fox is honored by the cow president Mr. Bull Clinton (based on Bill Clinton), who will present him with the Big Daddy Congressional Cookie of Justice. SPY Fox replies, "I got my cookie, has anyone got milk?" This concludes SPY Fox's mission.

Basic gameplay involves simply clicking on things to have SPY Fox interact with the world. The player advances by solving puzzles, talking with people and obtaining the required item to move forward. There are also an array of gadgets provided by Professor Quack that can help SPY Fox on his way, some of which include night-vision shoes, a coin trap and beef-flavored x-ray gum.

If the specific punch card/key/diode required is not taken into consideration, there are a total of seven individual paths: 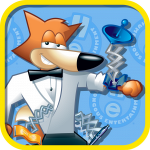 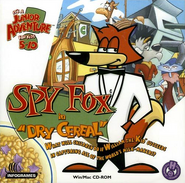 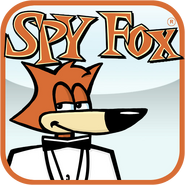