Putt-Putt Travels Through Time is a point-and-click adventure game developed by Humongous Entertainment in 1997. It is the fourth game in the Putt-Putt series. Infogrames later re-packaged this game in a bundle with Putt-Putt and Pep's Balloon-O-Rama in 1999. It was, fifteen years later, ported to iOS by Nimbus Games, Inc. on August 14, 2012. A Lite (demo) version was released a week later.

In this game, Putt-Putt must travel through time to retrieve his calculator, history report, lunchbox, and Pep. He travels through four time periods: age of the dinosaurs, medieval times, wild west, and the future. It is also the last game to feature Jason Ellefson as the voice of Putt-Putt.

The game begins with Putt-Putt packing his new school supplies. Putt-Putt is excited to show Mr. Firebird his history report, calculator, Smokey the Fire Engine lunchbox, and Pep before school starts. He wakes up Pep, brings his coin, and heads down the road to Mr. Firebird's Lab. He explains about his new Time Portal invention, which allows the past and future to be seen without actually traveling there. After Putt-Putt takes out his things, Mr. Firebird attempts to start the machine. After failing, he realizes he needs a coin to start the machine, and he is fresh out. Putt-Putt offers the coin, and Mr. Firebird starts the machine, stating it provides the perfect ratio between the inverted cup base trouble frequency, the molecular court, and the spin cycle.

However, the Time Portal goes haywire (out of control) and opens up. It sucks Putt-Putt's objects and Pep into time. A panicked Mr. Firebird tells Putt-Putt of the risk of being sucked into time unless the portal is closed for good. Putt-Putt assures him that he will gather his things and Pep soon, and enters the Time Portal. Putt-Putt must retrieve his lost things and his lost dog Pep in order for Mr. Firebird to close the portal for good.

Putt-Putt Travel Through Time, like other Humongous Entertainment games, is a point-and-click adventure game. The player takes control of Putt-Putt with the goal of rescuing Pep and his lost school supplies and having fun along the way. The game is played by using the mouse to interact with the environment. By clicking on various areas called Click Points, the player can collect items, talk with other characters, and watch funny animations. Items are collected to help the player solve puzzles. The game contains four different areas to explore: the Age of the Dinosaurs, Medieval Times, Wild West, and the Future. These areas are joined in the middle by the Time Portal and Cartown.

Each of Putt-Putt's four items has four possible locations, one in each era in time.

That's a total of sixteen individual paths, the highest of any Junior adventure. Each era can only have one item in it. Thus, the total number of games is 4! = 4*3*2*1 = 24. This is second to Freddi Fish 2: The Case of the Haunted Schoolhouse (56). 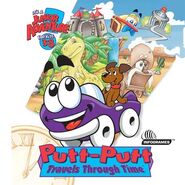 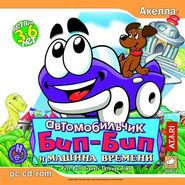 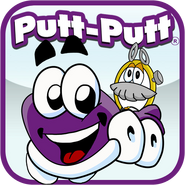 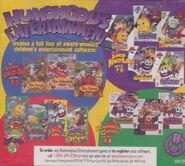 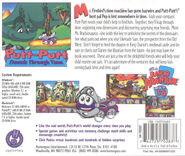 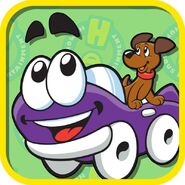 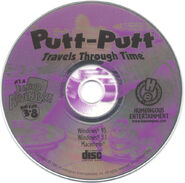