Putt-Putt Joins the Circus is the 6th game in the Putt-Putt series and was released in 2000.

In the game, Putt-Putt (once again voiced by Nancy Cartwright) and his dog, Pep, are going to B.J. Sweeney's Big Top Circus in Apple Valley. They hopped on Roll-Along Cassidy, a circus train after a goat ate Putt-Putt's ticket. When they reached Apple Valley, everything was in chaos for B.J. Sweeney, the ringmaster. The circus' five main acts: Honko the Clown, The Flying Porkowskis: Herb, Pearl and Hammy, Phillipe the flea, Reginald Cornelius Andronocles III the lion, along with two tiger sisters, Terri and Marie, and Katie Cannonball; and all the minor acts: Marvin the Marvelous, Eunice the unicycle, Francine the Hippo high diver, Ivan the semi-strong van, Sebastian the jugging seal, and Belobrodnik the Dancing Bear are having serious problems.

Putt-Putt and Pep also meet new friends like Lester the flea janitor, Bart the Peanut Cart, Hank the Security Car, and Bette Bandwagon, along with his old friends, Sammy, Baby Jambo and Mama Mombassa (two elephants and one seal from Putt-Putt Saves the Zoo). Putt-Putt must help all his new friends, so they will practice and finally perform under the big top in the opening night. This becomes a great success. 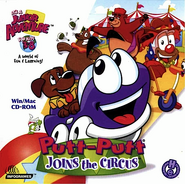 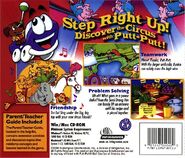 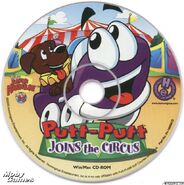 Title card
Add a photo to this gallery

Retrieved from "https://humongous.fandom.com/wiki/Putt-Putt_Joins_the_Circus?oldid=27769"
Community content is available under CC-BY-SA unless otherwise noted.