Putt-Putt Enters the Race is the fifth game in the Putt-Putt series. It was produced by Humongous Entertainment for the Windows and Macintosh operating systems in 1998 and released in early 1999. The game was later released on GameTap in December 2006.

Starting off with this game, Jason Ellefson no longer voices Putt-Putt. Instead, Nancy Cartwright, who is famous for voicing Bart on The Simpsons, does so.

Putt-Putt and Pep receive a letter from Redline Rick inviting him to enter the Cartown 500, and he's been waiting for this type of event all year, so he's definitely going to accept it. But he needs some things before he enters, so he needs to drive around Cartown and look for them.

Putt-Putt has to find the number of important objects before he qualifies for the Cartown 500 race: extra powered high octane gasoline, four racing tires, a safety helmet for Pep, and a flag with a specific number on it (1-9, Redline Rick tells Putt-Putt his official number on his checklist). When all of the objectives are completed, Putt-Putt is allowed to enter the race. At the end of the race, Redline Rick announces Putt-Putt as the winner with the medal and trophy. However, Redline Rick rewards Putt-Putt a ribbon if Putt-Putt did not win first, second or third place in the race. Putt-Putt says goodbye to everyone in Cartown who helped him prepare for the race.

The player takes control of Putt-Putt with the goal of finding some important racing supplies and having fun along the way. The game is played by using the mouse to interact with the environment. By clicking on various areas called click points, the player can collect items, talk with other characters, and watch entertaining animations. Items are collected to help the player solve puzzles. The game contains many different areas to explore around Cartown like north, south, east or west side. This game even has old friends to talk to from the previous Putt-Putt games.

The tires only have one possible location - Chuck's store, and they are obtained the same way every game. The other paths are as follows:

So there are six individual paths that are different in every game. Calculating the number of possible games is not super straightforward, as Mr. Fenderbender can't have both the flag and safety helmet. Thus, the number is calculated as follows:

Thus, there are six possible games. 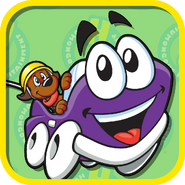 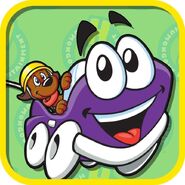 Retrieved from "https://humongous.fandom.com/wiki/Putt-Putt_Enters_the_Race?oldid=24156"
Community content is available under CC-BY-SA unless otherwise noted.