Putt-Putt is a purple convertible and the main protagonist in the series of the same name. He is always seen with his best friend and pet, Pep, a small brown dog, whom Putt-Putt rescues from a cave in his first game, Putt-Putt Joins the Parade. The character was created by Shelley Day as a new bedtime story for her son, Travis.[1] Soon after, Putt-Putt became the first of the many characters to be created at Humongous Entertainment, then a new company. Since 1992, Putt-Putt has starred in a total of thirteen games, seven of which are adventure games. He also starred in two arcade games and four activity games. Putt-Putt has been voiced by Jason Ellefson, Nancy Cartwright, and Michelle Thorson.

The first story with Putt-Putt took place not in a computer game, but in a book beside a child's bed. Putt-Putt's creator, Shelley Day, told Putt-Putt's first adventure to her then-three-year-old son, Travis, as a bedtime story in 1990. In the story, Putt-Putt saved a cat who had gotten stuck in a tree.[2][1]

The earliest of Putt-Putt's digital adventures began on the morning of the annual Cartown Pet Parade. When Putt-Putt wants to enter the parade, he finds that he needs a car wash, a balloon and a pet. In his search for a puppy, Putt-Putt discovers a dark cave on the edge of Cartown. Inside is a lost puppy. Putt-Putt adopts him and names him Pep. After obtaining all the needed items, Putt-Putt and Pep then ride at the front of the Cartown Pet Parade.

A Trip to the Moon

Putt-Putt visits the Fireworks Factory to visit Mr. Firebird. After a butterfly lands on a lever and Pep tries to stop it, Mr. Firebird's experiment is activated, causing a rocket to be ignited and sending Putt-Putt and Pep to the moon. Putt-Putt then meets Rover, a lunar vehicle, and the two vehicles search for all the missing parts of broken rocket to get back to Earth.

When Putt-Putt delivers Zoo Chow to Outback Al, Putt-Putt finds out that six baby animals are missing, so he has to find them before the zoo opens.

Putt-Putt and Pep are going to visit Mr. Firebird once again, so Putt-Putt grabs his school supplies (a lunch box, a calculator, and his history report) and a coin and goes to the old fireworks factory. Mr. Firebird is getting ready to start his time portal and it costs a coin. Putt-Putt gives it to him and he starts it. The time portal malfunctions and Putt-Putt loses his school supplies and Pep due to them being pulled in. He travels through time to find and save his things before school starts.

Putt-Putt and Pep receive a letter from Redline Rick inviting him to enter Cartown 500. To get ready for the race, they need to help out the residents of Cartown in order to obtain the needed items for it.

Putt-Putt enters the Cartown Circus, helps the circus friends and watches some stuff at the end.

Putt-Putt finds birthday decorations, including a cake and a birthday banner, to get Pep's birthday party ready for the next day.

Putt-Putt is a small purple convertible car featuring two fins. His eyes are located where the headlights would be and his mouth is placed above the front bumper. A pair of eyebrows float above his eyes giving him more character. Putt-Putt uses his retractable antenna to interact with objects around him. Although his normal color is purple, Putt-Putt's color can be changed in many of the games, with the exception of Pep's Birthday Surprise, in which he instantly turns back to purple afterwards.

Putt-Putt's dashboard has maintained a similar look throughout the course of the series. The original style, seen in Putt-Putt Joins the Parade and Putt-Putt Goes to the Moon, features a gas gauge, speedometer, steering wheel with horn, radio and a glove compartment. In his first game, Putt-Putt's gas gauge would drain as time progressed. He had the option of refilling it at the Cartown Gas and Tires. The speedometer is labeled in increments of five from five to thirty-five, thirty-five being Putt-Putt's top speed. The steering wheel is red and seemingly floats in front of the dashboard. In its center rests a yellow smiley which acts as Putt-Putt's horn. When used, the horn makes a silly face while the horn blares. The radio features a older style tuner and is always tuned to the same station (97.3). The glove compartment is where Putt-Putt keeps the items he finds on his adventures. It is divided into two sections by a single shelf that rests in the middle. Pep always sits on the bottom section. During times when Putt-Putt is asked a yes or no question, the shelf rotates forward to reveal the yes or no options.

Three years after his debut, Putt-Putt's dashboard was slightly redesigned to keep up with the higher standard of graphical quality. Though the dashboard maintains its original look, some small changes were made for Putt-Putt Saves the Zoo. The gas gauge no longer decreases as the game progresses. The radio now has a digital interface and is tuned to 97.3, presumably the Cartown radio station. The glove compartment also features a minor change as the shelf has been removed. Of all the minor changes, one object has been added; there is a key in the ignition found on the left of the dashboard under the gas gauge. The key is used to quit the game. This version of the dashboard is also used in Putt-Putt Travels Through Time.

In Putt-Putt's final Junior Adventure game, the dashboard was updated to compensate for the improved visual quality of the game. It has a more defined, shaded look. Aside from some color adjustments, only one new object was added. The smile's lips on the horn button's face are closed, unlike the previous versions of it. A minor change is that the radio station number (97.3) is no longer shown in the radio's screen due to its background color being too bright. The word "Load" is now purple instead of red, and the Quit button's box has completely different colors: orange, red, and dark blue, and the word "Quit" is capitalized. Instead of the yellow back arrow, a button for the options menu appears in the upper left corner of the screen attached to the sun visor.

Putt-Putt has the personality of a young boy. He is adventurous and always willing to try new things. His love of exploration has sent him into dark caves, the moon and even through time. His love for others is evident by the way he helps others in need. In fact most of the games in the Putt-Putt series revolve around helping others with small and large tasks. Putt-Putt is always friendly and shows his compassion to those feeling low. He cheers up many of the missing zoo animals while finding a way to rescue them in Putt-Putt Saves the Zoo. Putt-Putt is conscious of the environment in Putt-Putt and Pep's Dog on a Stick. In that game, the adventure starts with he and Pep driving to the junkyard on recycling day.

In Putt-Putt Saves the Zoo, ICanDrive=71595 can be added to the hegames.ini (or scummvm.ini) to show Putt-Putt's driver's license near the end of the credits. The license reveals information about Putt-Putt such as his birthdate, his height, his weight, and the card's expiration date. It reveals that Putt-Putt is an engine donor. It also shows his signature, despite missing the dash in his name.

Putt-Putt as seen in Putt-Putt Enters the Race

Putt Putt sinking in a whirlpool

Putt-Putt and Pep in Putt-Putt Saves the Zoo

Putt-Putt trying to shoo the giant mouse away.

Putt-Putt and Baby Jambo the Elephant

Putt-Putt and Little Skeeter the Snake

Putt-Putt and Pep dancing with the penguins

Putt-Putt and Zanzibar the Hippopatmus

Putt-Putt holding onto the vine

Putt-Putt swinging on the vine

Putt-Putt and an alligator

Putt-Putt About riding on the raft

Putt-Putt looking through the telescope

Putt-Putt and Masai moving the rock together

Putt-Putt and Masai the Giraffe

Putt-Putt and the Rhyming monkeys

Putt-Putt and the penguins

Putt-Putt and Pep as toys 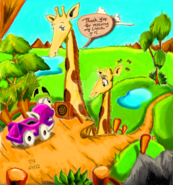 Putt-Putt and Masai and Mrs. Giraffe

Putt-Putt going to see Mr. Firebird during Putt-Putt Goes To The Moon 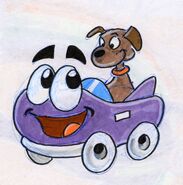