Pajama Sam: No Need to Hide When It's Dark Outside is a "point & click" adventure game in the Pajama Sam series developed by Humongous Entertainment for the Windows and Macintosh operating systems in 1996. Since then, the game has been re-released several times. In 2008, it was repackaged by Atari and Majesco Entertainment as Pajama Sam: Don't Fear the Dark and released for the Nintendo Wii.

When initially released in 1996, the game was priced at US $49.95. It was significant because this is the first Humongous Entertainment game to have changing game paths. Most Humongous games made after this would feature changing game paths, increasing its replayability. (Games prior to this usually had some sort of variation each time the game was played, such as different letters and locations in Fatty Bear's Birthday Surprise, different bottle locations in Freddi Fish and the Case of the Missing Kelp Seeds, etc.) It was also the first Humongous game to experiment with lip-sync in character animation, most prominent in cut scenes, as in other shots (such as in a typical clickpoint/walk-through screen) there is no lip sync when characters speak (similar to previous Humongous games).

One night, while reading the first issue of Pajama Man, Sam's mom enters his room reminding him that tonight is the night he sleeps with the lights out. Sam feels confident having his Pajama Sam mask just in case. After saying goodnight, Sam's mom turns off the light and closes the door. Sam tries to reassure himself, but the dark bedroom looks pretty creepy. Boldly, Sam transforms himself into Pajama Sam and decides to confront and capture Darkness, but first he must find his Pajama Sam gear: Pajama Sam Mask, Signature-Edition, All-Metal Pajama Man Lunchbox (or Portable Bad Guy Containment Unit), and the Illuminator Mark V Jr. Flashlight.

After finding all three items, he enters the closet, but the door closes behind him, then he falls into the Land of Darkness and lands on a giant baseball glove. After crossing a bridge, Sam is caught in a trap by several trees acting as custom guards. After taking his stuff away, the trees allow him to enter. Sam must then retrieve his three belongings before confronting Darkness. He goes on a quest: spanning a river, exploring a lava-filled mine, and both as well as in Darkness' house.

When Sam has retrieved his gear, he enters Darkness' closet and faces him. After Sam explains what he is going to do, Darkness asks why Sam would be afraid of him if he is the one who will be contained in the box. Sam, seeing that Darkness has no friends of his own, agrees to play a game of cheese and crackers with him. After winning a game, Sam tells Darkness that he should get home before his mom gets worried. They agree to play again tomorrow night. After jumping into his bed and saying goodnight to Darkness, Sam drifts off to sleep.

Pajama Sam features gameplay similar to the other Humongous games. It is played almost entirely with the mouse, using a left click to interact with the environment. Sam has an inventory which can be accessed at any time by hovering the mouse at the bottom of the screen. The save screen can be entered by pressing the S key and the load screen the L key. The Spacebar pauses the game, allowing several game options. The game is quit by either an option in the pause menu or pressing the stop sign.

Throughout the game's course, players are challenged with solving puzzles and interacting with characters. Puzzles are solved by using items to manipulate something in the environment. These items are usually found scattered around the game world or are obtained for other characters. All items are accessible through the inventory mentioned above and all have a purpose during the game.

Socks are collected as part of a large, optional "scavenger hunt". While in the land of darkness, Sam is encouraged to find and collect ten pairs of socks that have been thrown about. When each sock is discovered, the player is taken to the laundry room and places the sock in a laundry bin. After all ten socks are found, a "special animation" plays when the player re-enters the laundry room. This room can be accessed any time by clicking on the laundry basket icon in the right corner of the inventory.

Throughout the game, a running gag is the socks Sam has to collect. These are hidden everywhere around the land of Darkness. In every new game, there are 10 pairs of socks to collect. (There are actually well over 20 locations of each individual sock though, they change on every new game). There are in fact socks in almost every room, although some exceptions are the first area Sam visits outside the closet, some areas of the mines and the rivers, the kitchen and some interior corridors of Darkness' house.

Purple socks with rings around the toes and heel

White socks with two blue stripes around the ankles

Purple socks with a lighter purple ring around the heel

Solid green socks with a small crease near the toes

Gray socks with red stripes around the ankle and toes

Brown socks with red and orange lines criss-crossing on them

Whitish-orange socks with several lines around the ankle

Blue socks with red dots all over them

White socks with red, purple, and blue stripes around the ankle

Solid white-orange socks with small crease near the toes

Solid red socks with small crease near the toes

Yellow socks with lines near the ankle, a ring around the heel, and crease near the toes

Orange socks with dark red dots all over them

Solid brown socks with small crease near the toes

White socks with three dark-green stripes around the ankle

White socks with three dark-red stripes around the ankle

"(Sniffles) I assure you, we have no interests in your stuff."

The number of possible games is pretty easy to calculate. Each of Sam's things can have two possible locations:

There are six possible paths. The total number of possible games is 2*2*2 = 8. This does not include the locations of socks, the color of the flowers in the garden, or anything else that isn't a straightforward "game path." 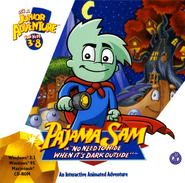 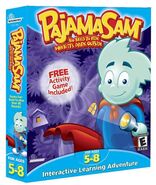 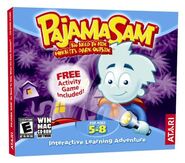 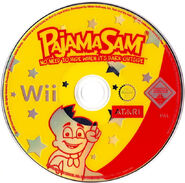 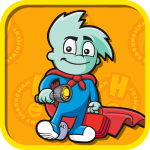 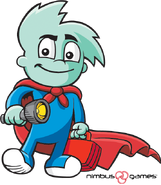 Pajama Sam is glad to meet us

Pajama Sam and the Talking Candles

Retrieved from "https://humongous.fandom.com/wiki/Pajama_Sam:_No_Need_to_Hide_When_It%27s_Dark_Outside?oldid=26653"
Community content is available under CC-BY-SA unless otherwise noted.