Pajama Sam's Games to Play on Any Day is a spin-off game developed by Humongous Entertainment and released in 2001 for Windows and Macintosh.

Pajama Sam is bored on a rainy day, so he decides to play a board game, but his favorite one is on the top shelf. Sam attempts to climb up to reach it, but falls back on a pile of other board games and lands in a strange world where he can play 8 classic games and 2 puzzle games. 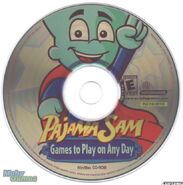 Steam re-release
Add a photo to this gallery

Retrieved from "https://humongous.fandom.com/wiki/Pajama_Sam%27s_Games_to_Play_on_Any_Day?oldid=27865"
Community content is available under CC-BY-SA unless otherwise noted.