Pajama Sam is the main protagonist in the Pajama Sam series. He is the only human Junior Adventure character Humongous ever produced. His adventures all seem to be based off his imagination, as shown by the Alice-In-Wonderland-styled adventures through weather factories, piles of dirty clothes, closets, and lands populated by food. Altogether, Sam starred in seven games from 1996 to 2003. He has been voiced by Pamela Segall Adlon, E.G. Daily, and by Elisha Ferguson.

No Need to Hide When It's Dark Outside

In this game, Sam has a fear of the dark (nyctophobia). In order to vanquish the darkness, he grabbed his superhero gear and ventured into his closet where Darkness lives. After losing his balance and falling into the land of darkness, his gear is taken away by a group of customs trees. Sam then explores the land, searching for his gear. Along the way, he meets King and Otto, two residents of the land of darkness who are willing to help him on his quest. After retrieving his gear, Sam enters darkness' closet and confronts him. After a short talk, they end up playing Cheese and Crackers. Sam, no longer afraid of the dark, hops into his bed and goes to sleep.

Thunder and Lightning Aren't So Frightening

In this game, Sam has a fear of Thunder (astraphobia). During a scary thunderstorm, Pajama Sam journeys through his attic and up into the clouds to World Wide Weather. While confronting a surprisingly kind Thunder and Lightning, Sam accidentally causes a major malfunction by tripping and hitting button that causes some pieces of the weather machines to be shaken loose and scattered in different places in WWW. Sam is tasked with retrieving several missing important parts, before the CEO and president of WWW, Mother Nature, an onion, finds out. The side objective of this game is to find all of the missing puzzle pieces, which will form an amusing picture when they are all collected.

You Are What You Eat From Your Head To Your Feet

In this game, After spoiling his dinner with several boxes of cookies in order to get 20 box tops for a Pajama Man action figure with titanic elbow thrust, Pajama Sam chases down some snickering cookies, only to find himself in the midst of a food squabble! The fats and the sweets are taking over MopTop Island, where a conflict is taking place between healthy and junk food, and an emergency peace conference has been called, but four of the delegates are missing! Pajama Sam springs into action to find the missing delegates, put a stop to the sticky quarrels, bring peace to MopTop Island, and still make it home in time for dinner.

Life Is Rough When You Lose Your Stuff!

In this game, Pajama Sam is just about to turn off the TV when he sees an ad saying that Pajama Man will be signing autographs at the local mall. Overjoyed by this, he asks his mom if they can go and she says "yes" saying she has a few things she could pick up herself. Afterwards, Sam rushes into his room to get his mint-condition Pajama Man issue #1 copy for the hero to sign, only to find out it's missing. Once he finds it, the comic gets dragged into the contents of his room, forcing him to go into the mess to retrieve it. After falling through a hole for the 3rd time, Sam encounters a sentient, yet filthy sock, who sings a song about how he wants to be part of a pair. Sam volunteers to help saying he misses something he cares about too, i.e. his Pajama Man comic book. The sock says he recalls seeing a sentient and old half-eating cheese sandwich running through with a comic book who mentioned something about Dr. Grime signing autographs at a place called the Grubby Corners Mall. Concerned about the comic, Sam makes it his mission to both help the sock get back together with his friend and find the mall before Dr. Grime has a chance to touch it.

Once Sam makes it to the mall, he's immediately stopped by a guard who tells him he can't go in because he doesn't have the proper attire. The guard tells him that unless he gets a shirt, some shoes and socks, he's not allowed to go inside.

Sam is a six year old little boy with teal skin tone and hair. His skin and hair blend in a way that it is hard to tell where one begins and the other ends. The hair on his head is always messy and no amount of hair products can ever keep it looking neat and tidy.[1] He is always seen in his blue one-piece pajamas. The pajamas cover his whole body and have white booties for his feet. When he goes on adventures, Sam dons his red cape to look like his favorite action hero, Pajama Man. 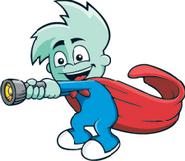 Sam with his trusty flashlight 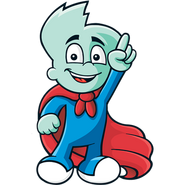 Those guys have cheeses for heads

Retrieved from "https://humongous.fandom.com/wiki/Pajama_Sam?oldid=28743"
Community content is available under CC-BY-SA unless otherwise noted.