Herman is one of the many characters Freddi and Luther help in Freddi Fish and the Case of the Missing Kelp Seeds.

Herman is a red hermit crab, who is approximately the same size as Freddi Fish.

Freddi Fish and the Case of the Missing Kelp Seeds

When first encountered by the duo, Herman is dwelling in a glowing neon shell, much to his own bother. He couldn't go to sleep, due to the shell glowing nonstop, thus keeping him awake. After Freddi and Luther come to his aid by giving him a purple shell (which Freddi picks up in the same cave Gabby Halibut is stuck in) that doesn't glow, he moves into the new shell and dons a green night cap, so that he can finally go to sleep. As a reward, Freddi gets the glowing shell.

Herman appears in all versions of the storyline, but he is only important in the Three Caves storyline. 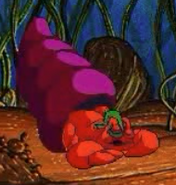 Herman sleeping in his new shell
Add a photo to this gallery
Retrieved from "https://humongous.fandom.com/wiki/Herman?oldid=27190"
Community content is available under CC-BY-SA unless otherwise noted.