Freddi Fish and the Case of the Missing Kelp Seeds is a computer game developed by Humongous Entertainment and the first installment in the Freddi Fish series. It has been released many times on three different operating systems and the Wii (initially re-issued for Windows 95.) This game is significant in Humongous' history because it is the first Humongous video game to use hand-drawn animation. Hence, the game's graphics are a major improvement to those of its predecessor, Putt-Putt Goes to the Moon. Though graphics would improve more over time, this game set the new standard for games to come.

The adventure begins when Freddi Fish visits Grandma Grouper with a gift of flowers, or rather, the last one of two flowers she receives from her pelican friend Sam (the first one she gives to either a young male fish named Jason, or a depressed sea turtle named Snappy). Grandma Grouper is sad that her treasure chest full of kelp seeds has been stolen. As a result, her garden has begun to wilt, leaving them without any food. Courageously, Freddi promises to find Grandma Grouper's stolen treasure chest. This puts a smile on Grandma Grouper's face and she gives Freddi her last peanut butter and jellyfish sandwich to take on her journey.

After going a short distance from Grandma Grouper's house, Freddi finds Luther, who is trying to swim loop-de-loops. He bets her she can't do it, and so she shows Luther how to do it and he tries again, hitting his head on some coral (again due to how close he is to it and how big he is attempting it). A bottle is knocked loose and floats to the ground. When Freddi and Luther investigate, they discover that a note has been lodged inside the bottle. After reading the note and finding a message telling them where the treasure is, Freddi and Luther begin their journey to find the missing kelp seeds.

The player takes control of Freddi Fish and her friend Luther with the goal of finding Grandma Grouper's kelp treasure full of kelp seeds and having fun along the way. The game is played by using the mouse to interact with the environment. By clicking on various areas referred to as Click Points, the player can collect items, talk with other characters, and watch entertaining animations. Items are collected to help the player solve puzzles. The game contains many different areas to explore: the castle, the old whale bones, the deep canyon, the volcano, the junkyard, the caves and the beach above the surface. These areas are joined in the middle by Grandma Grouper's house.

Each of the three bottles to find (apart from the one obtained at Grandma Grouper's house) can be located on a certain place.

In case of the three caves storyline, the bottle can be either in the left, middle or right cave. With this variation not taken into consideration there are a total of seven individual paths. The number of possible games is 3*2*2 = 12.

In Mr. Starfish's room, pre-release screenshots and the savegame portrait indicate there's a skeleton fish replica. It doesn't exist in the final version of the game, but, it can still be run using through ScummVM's debugger. 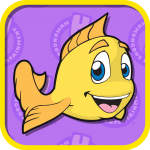 Title Card
Add a photo to this gallery

Retrieved from "https://humongous.fandom.com/wiki/Freddi_Fish_and_the_Case_of_the_Missing_Kelp_Seeds?oldid=28467"
Community content is available under CC-BY-SA unless otherwise noted.