Freddi Fish and Luther's Maze Madness (also referred to as Freddi Fish's Maze Madness) is a computer arcade game developed by Humongous Entertainment in 1996. In 2013, the game was ported to iOS by Nimbus Games. It is the first of two Junior Arcade games based in the Freddi Fish series.

Freddi Fish sees Luther approaching Grandma Grouper's house and asks him, "What's up?" Luther replies that Grandma Grouper promised him some Chocolate-Covered Worm Doodles for stopping by. After telling Luther that Grandma Grouper isn't there at the moment, Freddi reminds him that eating Worm Doodles before lunch ruins his appetite. Luther then swims towards the house and remarks that it won't ruin his appetite just to look for them. As he begins searching, he finds an old chest which Freddi tells him not to open. Ignoring her warning, Luther throws open the chest and dives inside. The chest then erupts in a large stream of Kelp Seeds which are carried far away by an ocean current. After apologizing to Freddi, Luther agrees to help get back the Kelp Seeds, enthusiastically remarking, "Full steam ahead!"

After successfully finding all of Grandma Grouper's Kelp Seeds, Freddi and Luther return to her house and dump the Kelp Seeds into the chest. "Mission Accomplished!" they shout as they give each other a high-five. Luther hungrily mentions that it is "Worm Doodle time," at which Freddi replies, "Yeah, right, Luther!" After the credits have played, Luther mentions that he was serious about the Worm Doodles. Once again, Freddi tells Luther not to eat them before lunch, but after Luther begins to whine, Freddi allows him to eat one, "just this once." At this, Luther joyously thanks Freddi, "Thank you, Freddi! Thank you, thank you, thank you!"

Maze Madness is quite similar to the Pac-Man arcade game, with the player controlling Freddi Fish using either the arrow keys or the mouse. The goal of each maze is to collect all the Kelp Seeds while avoiding the hazards and obstacles contained within. Points are collected by obtaining kelp seeds, bonus items, and squishing enemies to name a few. The number of tries Freddi has are indicated by the number of Peanut Butter and Jellyfish Sandwiches in the HUD. When Freddi is overtaken by an enemy, she tosses a sandwich to distract the foe while she makes her escape. There are fifty different mazes found in Maze Madness and after every five levels the scenery art, background, and music changes. Bonus Rooms are also featured in Maze Madness and while sometimes hard to find, are an excellent source of points.

The game can be played with either the keyboard or the mouse. They keyboard features similar controls to many games as it utilizes the arrow keys for movement. Additionally, the Enter and Ctrl keys are used for shooting bubbles at enemies while using the Bubble-Shooter powerup. The mouse can also be used as a means of control. When the mouse it clicked on an open spot in the maze, a waypoint is set and Freddi begins to move towards it. If the Bubble-Shooter has been attained, it can be fired by holding the mouse button.

Like many of the Junior Arcade games, Maze Madness features a Junior Helper option. It is found by moving the mouse to the bottom of the screen while in the level selection menu. This particular option has two choices: Bubbles On, Unlimited Tries.

The game consists of fifty levels with a variety of themes. 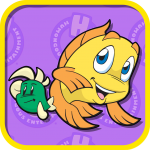 The grand title of the game 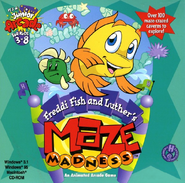 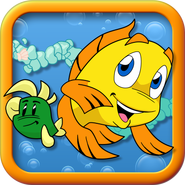 iOS App
Add a photo to this gallery
Retrieved from "https://humongous.fandom.com/wiki/Freddi_Fish_and_Luther%27s_Maze_Madness?oldid=24174"
Community content is available under CC-BY-SA unless otherwise noted.