Freddi Fish 3: The Case of the Stolen Conch Shell

Freddi Fish 3: The Case of the Stolen Conch Shell is the third Freddi Fish game and was released in 1997. The game was later ported to the iOS and renamed Freddi Fish and the Stolen Shell on January 12, 2012.

Freddi Fish and Luther are taking a summer vacation to the Founders' Day Festival. As they enter the festival, the Conch Shell which is used to signal the beginning of the Founders' Day Festival has been stolen! To make matters worse, Luther's Uncle Blenny, the "Grand Exalted Keeper of the Conch" is being blamed for this mess! Now Freddi and Luther have to find the three golden pipes that fell out, and look for the real thief. They search and investigate the suspicious characters to find out who really "done it". Once all three of the pipes are found, Old Soggy, Uncle Blenny's dogfish, will smell the scent and find the culprit. Freddi and Luther followed Old Soggy to the temple.

In the temple, they spot the thief with the bag and the conch shell outside. Old Soggy is going to catch the thief. When Luther draws attention to a jewel, he grabs it, falls backward onto a thrown and the gate closes. While sitting on the thrown, it pulls Luther into a cage and Freddi has to get the key to get it open. After Freddi frees Luther and Luther puts the jewel back in place, the gate opens and the bag floats in the temple. They caught the bag and tells everyone that Uncle Blenny is innocent. Inside the bag is one of the six items: microphone, foreign language world map, punching glove, cane, spool of thread, or toothbrush. One of the suspects is depending on the evidence from the item. When the suspect is chosen, he or she does not believe Freddi and Luther, but Old Soggy bites its tail or back. The culprit confesses and explains the whole situation to everyone.

After the culprit gives Uncle Blenny the conch shell, everyone apologizes to Uncle Blenny for blaming him. He forgives and is still the "Grand Exalted Keeper of the Conch". Luther places the pipes in the shell and Uncle Blenny blows out the signal to open the festival and everyone celebrates. The dialogue shows what will happen to the thief as the narrator mentions it, then he says "case closed," meaning the player finished the game.

The player takes control of Freddi Fish and her friend Luther with the goal of finding three golden pipes to find the culprit and having fun along the way. The game is played by using the mouse to interact with the environment. By clicking on various areas called click points, the player can collect items, talk with other characters, and watch entertaining animations. Items are collected to help the player solve puzzles. The game contains four different areas to explore: the festival, the waterfall, the sunken plane and the tropical island on the surface. These areas are joined above and below the ocean.

Freddi Fish 3 contains seven mini-games that provide loads of entertainment. While playing the mini-games isn't always necessary to finish the game they are a lot of fun, so give 'em a try!

Each of the three golden pipes has its own independent set of possible paths. That is, there aren't a certain number of possible locations from which three are selected (like in the previous game), but each golden pipe as treated as a separate "object to find." So their paths are chosen in a similar manner to the paths in the Pajama Sam series.

There are a total of eight individual paths. The number of possible games is 2*3*3 = 18. 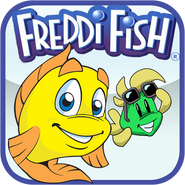