Freddi Fish 2: The Case of the Haunted Schoolhouse

Freddi Fish 2: The Case of the Haunted Schoolhouse is a point-and-click adventure game developed by Humongous Entertainment in 1996. It is the second game in the Freddi Fish Junior Adventure series.

In this game, Freddi Fish and her pal Luther encounter a ghost stealing their classmates' toys. They decide to set a trap for the ghost. However, they will need to search around the area to find more parts for their trap.

On her way to school, Freddi Fish meets Luther, who brings his Codfish Commando Action Figure for show and tell. As they enter the classroom, they see that the guppies of their class are hiding. Mrs. Croaker explains that the guppies saw a ghost that steals their toys. Suddenly the ghost appears, scares everyone, grabs Luther's action figure and gets away. Freddi thinks the ghost isn't real, and promises everyone that she and Luther will find it.

They chase the ghost into the school basement. Luther manages to retrieve his toy as the ghost gets away, leaving behind a torn piece of sheet. Freddi sees that the ghost is really just someone wearing a ghost costume, and decides to build a trap in the basement. They need to find five more parts in order to set up the trap.

After they have everything, Freddi and Luther set up the trap and uses Luther's toy as bait. The ghost returns and gets the toy, but gets caught by Freddi and Luther. The ghost turns out to be Spongehead and Boss. Freddi tells the sharks that they should not steal things that belong to someone else. The sharks give back the guppies' toys, and Luther gives his toy to the sharks to give to the Squidfather, who never had any toys to play with. The two return the toys to the guppies and explains the solution to Mrs. Croaker. She and the guppies give a cheer to the two for saving the school.

The player takes control of Freddi Fish and her friend Luther with the goal of finding five more parts and having fun along the way. The game is played by using the mouse to interact with the environment. By clicking on various areas called click points, the player can collect items, talk with other characters, and watch entertaining animations. Items are collected to help the player solve puzzles. The game contains four different areas to explore: the tide pools, the submarine, the city and the old ruins. These areas are joined in the middle by schoolhouse.

Contained within Freddi 2 are three mini-games which will provide hours of entertainment in and of themselves.  While it isn't necessary to complete any of these mini-games in order to win Freddi 2, they are a lot of fun, so give 'em a try.

Each trap part has its own path/storyline; thus, the game has eight written paths. Five items are chosen out of the eight, thus, the number of possible path combinations is 8*5 = 40, the highest of any Junior Adventure. 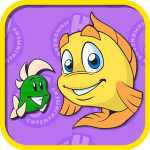