Fatty Bear's Birthday Surprise is a point-and-click adventure game developed by Humongous Entertainment in 1993 for DOS and Macintosh, on both floppy disks and CD-ROM, as well as the 3DO. The game was later re-released in 1995 and contained a Windows/Mac/DOS compatible disk.

Fatty Bear's Birthday Surprise is the second game made by Humongous Entertainment. It is the first and only game of the Fatty Bear series, besides the mini-game compilations Fatty Bear's Fun Pack and Putt-Putt & Fatty Bear's Activity Pack.

Fatty Bear's Birthday Surprise is the story of a red-overalled teddy bear who comes alive at night and plans a surprise party for his owner, Kayla. Several of Kayla's other toys help him out along the way, while a pesky puppy causes trouble at every turn. Everyone seems to be perfectly okay with the fact that Kayla's parents take all the credit for the party (and what were they going to do if the cake and decorations hadn't magically appeared overnight?)

Unlike most Humongous games, which received a slew of sequels and spin-offs, Fatty Bear got one game and two activity packs (one of which was a crossover with Putt-Putt) … and that was it, aside from a few cameos and some rather mean-spirited jokes in other Humongous games. Apparently, this was almost entirely because of the sensitivity of having "Fatty" in his name.

In this game, Kayla is having her birthday tomorrow and it's time for her to go to bed. While she sleeps, her toys and stuffed animals come to life to prepare for her party. Fatty Bear searches through the house looking for ingredients with which to bake a cake. Unfortunately, it is not as easy as Fatty Bear thought - he had planned on baking the cake, but in the kitchen was a mysterious package. When he curiously inspects it, a small brown puppy pops out of it and promptly runs away, tearing the ribbon on the box.

After that, Fatty Bear helps Gretchen set up for Kayla's party by finding the letters for a "Happy Birthday" sign and blowing balloons in her bedroom. In the kitchen, the ingredients he found are used to bake a cake with the assistance of Matilda Rabbit. Then, using a bone and a ribbon he found, he lures the puppy back into her present box and ties it up. Finally, Fatty Bear jumps into Kayla's bed, going back to stuffed animal form before she wakes up. The next morning, Kayla awakens and announces that her room is beautiful. Her father comes to wish her a happy birthday and deliver her surprise, which turns out to be the puppy that rushes into the room and leaps onto her bed. Kayla thanks Fatty Bear for the best birthday she's ever had, giving him a big hug. Fatty Bear winks at the player and the credits roll.

Full Walkthrough, on the wiki. 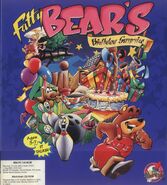 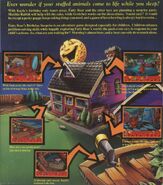 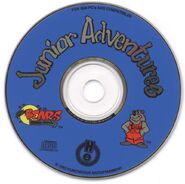 The back of the 3DO cover 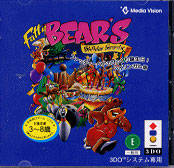 Linus Front Cover
Add a photo to this gallery

Retrieved from "https://humongous.fandom.com/wiki/Fatty_Bear%27s_Birthday_Surprise?oldid=28006"
Community content is available under CC-BY-SA unless otherwise noted.