View source
watch 01:36
We're Getting Mutants in the MCU - The Loop
Do you like this video?
Play Sound

Fatty Bear is a stuffed teddy bear that belongs to a young girl named Kayla and her parents. Fatty Bear is Kayla's favorite toy. He is a plain brown bear with black button eyes, wearing a red pair of overalls (with pockets) with a single strap broken partly on the right-side and plain light colored shoes. He was voiced by Scott Burns.

At night, while everyone is sleeping, he and his toy friends wake up.

Despite his name, Fatty Bear isn't fat - as players see during Birthday Surprise, he's an active, healthy character that does a lot of running around trying to prepare a surprise birthday for Kayla. Like all young bears, he just looks a little rotund.

Fatty Bear has only starred in three games:

Fatty has also had multiple cameos since then. All of the games were originally for DOS, then pre-OS8 Macintosh, and finally ported to Windows/Mac CDs. However, the graphics are presented as 320x200 just as they were for the DOS version.

The early version was available on 5.25' and/or 3.5' disks and on CD, but the later Windows/Mac hybrid CD was not available on floppy disk too.

After Kayla falls asleep, Fatty Bear and his friends wake up in order to get things prepared for Kayla's birthday party. His first task is preparing a cake for the party. Fatty Bear's plans become slightly hindered when Kayla's present, a puppy, escapes from the gift box and starts causing problems. Eventually Fatty Bear is able to get the party ready and seal the puppy back up until the party starts. When morning comes, Fatty Bear and friends become inanimate again and Kayla, after seeing the party decorations and getting her puppy, thanks Fatty Bear for helping.

Fatty Bear has appeared in many of the Humongous Entertainment games. 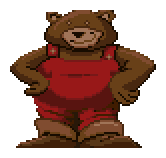 Fatty Bear as he appears in his first game.
Community content is available under CC-BY-SA unless otherwise noted.
Advertisement