Claw is a lobster in Freddi Fish 3: The Case of the Stolen Conch Shell. He is a bully who doesn't like to share items.

Claw refuses to share his flashlight with Freddi Fish and Luther. To get the flashlight, they must win at least one mini-game with Gill Barker. They receive a mirror after that. When Claw sees himself in the funhouse mirror, he reforms and gives Freddi his flashlight.

Getting the Great Conch Shell

Later on, if the special item in the bag the thief dropped is the boxing glove it is the object which belongs to him. Give it to him and he will say that it would belong to anyone, but Old Soggy bites his tail. He admits that he stole the Conch because the guys at the Bullies Club, being "bigger bullies than [he is]," "made him do it". His crime is regarded a violation of code 119 for his really bad attitude and is forced to take a ballet for bullies class (with a pink tutu and little ballet slippers) for a year as punishment. 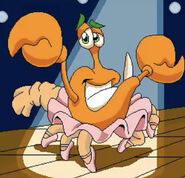 Claws punishment
Add a photo to this gallery
Retrieved from "https://humongous.fandom.com/wiki/Claw?oldid=26976"
Community content is available under CC-BY-SA unless otherwise noted.